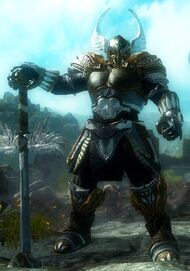 Caos are giant humanoid beings that die and come back to life to forever fight for their patron God in the crusade. They are what the players of Ascend: Hand of Kul play as in the game. They constantly Ascend in hopes of one day Transcending.

An Ascended Champion is an A.I. controlled Caos that fights forever in the crusade. They are set with what ever armor, weapons, spells, and emblems that the player had on it at the time of Ascension.