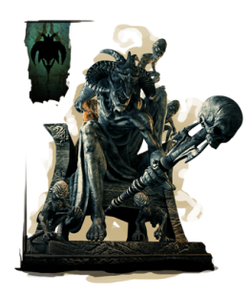 The God of Void is one of the three New Gods the player may align with in Ascend: Hand of Kul.

A master of the in-between, the God of Void governs the borders of life and death, blurs the line between reality and illusion, and settles among clarity and madness. Like the emptiness of nothing, he is an enigma. Not much is known about his true intention, form, or even name. Taking delight only in the mockery and disruption of both Gods and humans alike, his ever-twisting agenda is for his own inscrutable purposes.

Choose the Void alignment to wield ice magic against your enemies, earning mysterious, inhuman armor and spells that enhance your magical prowess for your dedication.