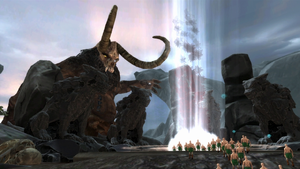 The Titans were once spiritual Gods who were worshipped by man in the earliest days of creation. The world was a paradise then, and the love between divine and human flowered into a perpetual Golden Age where countless works of art, science, and architecture were born. As their Dominion grew, the Gods found they were able to physically manifest themselves in the material world and commune with humans directly, taking on towering bodies of power that were worshipped night and day. Their followers were overjoyed to behold and serve their deities-become-flesh, and great festivals were held each time their God returned.

Each time the Gods returned to the physical world, they desired its sensations a little more, and languished for longer periods before returning to the realm of spirit. They became selfish and cruel, barely detectable at first, but soon demanded every pleasure and offering. As their appetites grew, they began warring with each other, seeking to expand their worshippers at the expense of the other Gods.

When they finally acquired the taste for human blood, feasting in huge gorging sacrifices, they lost the ability to return to the realm of spirit. The Gods began to lose their memory and degenerated into giant beasts. Their empires gone, followers decimated and scattered to the edges of the world, the Titans have mindlessly prowled the earth for centuries, hollow reflections of what they once were.

With the rise of the New Gods, the brutal age of the Titans is coming to an end. Overall, these guys look pretty epic and are huge